Empress Of singer Lorely Rodriguez talks about her insistence on living through empathy and her DIY origins in Los Angeles.

Lorely Rodriguez has been trying to write a story about her years in New York City. The 27-year-old Angeleno musician, better known by her stage name Empress Of, spent four years in New York, which she says, “was like school—a life education, trying to survive.” Rodriguez’s New York years span Obama’s second term. She was newly out of a college in Boston and releasing anonymous demos online, then singles and an EP that lead to a first studio album. Rodriguez grew up in Pasadena and East LA. She was raised mostly by her mom, who’s from the San Pedro Sula region of Honduras, a country Rodriguez hasn’t visited since she was a girl because, as she puts it, “I like my limbs where they are.” The violence of Honduras is different than in New York, but Rodriguez will acknowledge that too as she speaks of hating the Big Apple’s rats, cat calls, and class divides. “Being an artist living in New York, not being born super wealthy, being from a working-class family,” Rodriguez told the press in 2015. “It was fucking hard.” The New York story Rodriguez is trying to write, though, isn’t about that.

“It’s about being raised in DIY venues,” Rodriguez tells me near her current home in Highland Park, Los Angeles. “That was such a huge thing when I was learning to make music, and isn’t so much anymore. I saw so many live shows.”

Rodriguez’s first show was in a DIY venue. “I was 20 or 21,” the artist stories, “performing to five people with two guys behind me. It was really sad attempt. I didn’t know how to translate the sounds I learned to make on my laptop to a live show. Now I know.” 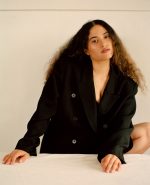 Empress Of’s second album will be out within the year. Rodriguez has been working on it since she finished her first album, Me, in 2015. While Me was like it’s titled— “really introspective and so emotional,” also independently made (Rodriguez composed the majority of it alone in Mexico City)—this new record, I’m told, “is very communal.” Working with a variety of collaborators, producers, and writers, Rodriguez says, “the music feels different. It feels celebratory and communal. I’m really excited to play it live.” Two singles from the album are already out, “Trust Me Baby” and “In Dreams.” Both are perfect for listening to while driving around Los Angeles. The lyrics shift between Spanish and English. Confía en mí / Trust me baby. The beats are bouncy and coast along, unobstructed, by Rodriguez’s choral voice.

“The thing I learned the most,” Rodriguez says about her foray into collaboration, “is that no matter what someone adds to yours music, you have the power to keep changing it. I’ve learned how to say, this is my goal, this is my vision.” This is like what Rodriguez says she learned while living in New York City: “How to defend myself and my priorities. Just stepping out the door in that city is adversity, so you learn how to be really tough.”

Rodriguez wears her hair in a frothing mane the day we meet, fine little curls cloud around her face. She’s been studying music for as long as she can remember, and this comes up after she asks us to go inside. Outside, we were talking on a front balcony, when the street noise, already clangy, started competing with a family speaking rapid Spanish; Rodriguez lost her words, then asked that we move inside. 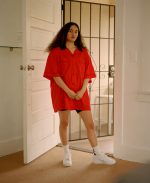 “I’m really bad with sound,” she explains in our newfound quiet. “It’s like sound ADD. Like if I’m in the car with my boyfriend, and there’s music in the background, he’ll try to to talk, and I’m like, if you want to talk, you have to turn the music off. I think it’s because I listen to sound all day. I edit it and work on it. Whenever I hear something that’s at all musical, I hyperfocus.”

Since Rodriguez has been doing this, “forever—I’ve always studied music,” she can’t, “just listen for fun.” Though she’s trying to learn to write prose to compose that New York story. “I’m trying really hard!” Rodriguez exclaims, “to learn to just be a listener. Pretending I’m someone who doesn’t make music helps.”

Empathy comes up a few times in our conversation. First, with Rodriguez’s imagining herself as a pure listener. Next, when she’s describing her home of Los Angeles, which the artist values for its diversity. “LA represents so many different parts of the world,” explained Rodriguez. “All different types of people, different skin colors, music, languages, and food. I love it.” After she brings it up again. “Empathy is learning about all different types of people.”  The last time empathy comes up, it’s by my noticing. I ask Rodriguez what she remembers about people right after she’s first met them. “The first thing I forget is names,” she replies. “Even when I’m still hanging out with you, I’ll have forgotten your name. I never remember what people were wearing, either.” The things she notices are eye contact, body language, and voice. “All really obvious ways in which people connect with each other,” she said. And Rodriguez interprets this stuff, I say, emphatically—she notes, for instance, that someone’s soft spoken demeanor might mean they’re an introvert, more interior.

“No matter what someone adds to yours music, you have the power to keep changing it. I’ve learned how to say, this is my goal, this is my vision.”

Though Rodriguez is socially adept, capable of vibing with the photographer and her assistant on her shoot, then me, all the while fielding texts from friends and family, the artist also loves being alone. “Being alone is really important for making art,” she says. “I like to have a lot of time to reflect and really think about what I want to make.”

On days alone in her studio, Rodriguez likes to dress up. Though she could roll out of bed and into it—her studio is in her home—Rodriguez always does herself up. “It makes it more of a moment,” she explains. “I love wearing something dope, even if no one will see me. I really like, if I pass by a mirror, to be like, yeah, I’m killing it.”

Rodriguez styled herself for her shoot, in an oversized blazer with running shoes, looking, she joked, liked an ’80s office worker on her commute. Rodriguez brought a few looks and changed between them without fussing. She seemed professional and practiced before the camera, ready for the more attention that’s coming. 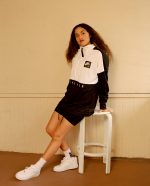 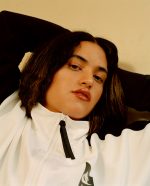 In her home of Los Angeles, Rodriguez recognizes, “different kinds of challenges, like keeping in touch with reality and trying to keep my hunger when everyday can seem okay” (the weather’s “perfect”). Rodriguez’s hunger is, “for being successful and being an artist,” and she says it’s felt in the body. “My hunger, my ambitions, my drive. It’s my truth. It’s a spiritual feeling. My dream.” Rodriguez’s stage name comes from a card in the Tarot. The Empress, part of the Major Arcana, is traditionally figured with a crown and/or halo of stars above her head. She sits at ease on a thrown with symbols of fertility, abundance, and nature around her, maiden-aged.

The week I met Rodriguez, I also met Elaine Kahn, a musician and poet who was in the company of Kim Gordon. Though they differ in social attitude and tone, there’s a poem by Kahn that reminds me of Rodriguez, with her hunger and reserve. Titled “Self Love / The Empress,” the poem begins: “I hate sleeping because / then I cannot keep improving / I don’t think there’s anything / the matter with ambition / My betterness or worseness / is not part of the public domain.”

A look back at Gore Vidal’s “sexual paradise”