We live on a water planet, surrounded by a delicate, incredibly thin atmosphere. It should be no surprise that when we look out into space, and when we send our sophisticated satellites and rovers and instruments to peer at other worlds, we’re always looking for water. Without water, life as we know it would be impossible. Cultures around the world have similar sayings and proverbs about the value of freshwater. In 1746, Benjamin Franklin wrote, in Poor Richard’s Almanack, “When the well’s dry, we learn the worth of water.” Russians say, “You must drink the water of the river you are traveling on.” An ancient Chinese proverb translates as, “When the river is full, the well is full.” A Kashmiri proverb asserts, “It is easy to throw anything into the river but difficult to take it out again.” Still another saying, “The frog does not drink up the pond in which it lives,” has been attributed to native cultures in the Americas.

Three-quarters of the Earth’s surface is ocean. Both the northern and southern poles are massive ice caps. Water surrounds us as vapor in the air and lies under our feet in groundwater. Our own bodies are made up of water—roughly 60 percent by weight. And without the atmosphere above us to filter out dangerous solar radiation and retain heat, the Earth would be a frozen, lifeless ball. 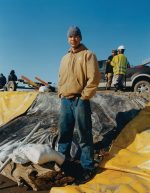 To slow down the rapid erosion
of their shoreline, villagers in Napakiak improvise in whatever ways they can, using tarpaulins, logs,
and sandbags.

Apart from the air we breathe, no other natural resource is as important as water to our health and well- being. Yet humans are facing a very real and very challenging climate and water crisis. The planet’s burgeoning population, which now exceeds 7.5 billion, is diverting, depleting, and contaminating water and emitting green- house gases in such quantities as to change the very climate on which our lives depend.

Most of us today are surrounded by modern technologies unimagined a century ago, and the pace of innovation is accelerating. New forms of media connect us in new ways, bringing information to every part of the world and helping us form both virtual and real communities and networks. Yet more than 2 billion people still lack access to safe drinking water, and more than 4 billion lack access to adequate sanitation. Millions of cases of preventable water-related diseases still plague impoverished communities in parts of Africa, Asia, and Latin America. Armed conflicts in which water represents a trigger, a weapon, or a target are on the rise. Water pollution from human and industrial wastes contributes to both ill health and water scarcity. The water available to grow food for our expanding populations is increasingly overdrafted and contaminated. And growing human demands are depriving more and more ecosystems of the water they, too, need in order to thrive.

For years, the scientific community has argued that our climate will be changed by the uncontrolled emissions of greenhouse gases, such as carbon dioxide, caused by the burning of fossil fuels and other industrial activities. Those warnings have gone largely unheeded by our politicians. We are now paying the price of that inaction: The planet’s temperature is rising; extreme droughts and floods are expanding; the oceans are warming and becoming more acid, destroying fish populations and coral reefs; and ice in the Arctic, Antarctic, and Greenland is melting at an accelerating rate, leading to sea-level rise and new threats to coastal communities.

“We are now paying the price for that inaction: Ice in the Arctic, Antarctic, and Greenland is melting at an accelerating rate, threatening coastal communities.”

In order to stave off catastrophic ecological and economic consequences, following decades of inaction, humanity must now act on two fronts: We must rapidly ramp up efforts to slow the rate of climate change by eliminating the combustion of coal, oil, and gas and other actions that emit dangerous warming gases, and we must simultaneously prepare to adapt to the effects of those climate changes we can no longer prevent.

We are all at risk from our own actions and inactions, but the vulnerability of small, local communities, disenfranchised groups, and those living on social and geographic margins deserves special attention and protection. The haunting photographs that Laurence Ellis made for this portfolio highlight some of these remote communities in Alaska, which are contending with shoreline erosion, melting glaciers, and thawing permafrost. Ellis focuses in particular on the lives and challenges of younger people, who will be on the front lines of the most severe consequences of climate change and water scarcity.

“I wanted to avoid the usual cultural stereotypes or manner in which these communities are often portrayed,” said Ellis, who is based in London. “I wanted to establish an emotive understanding about these peoples’ strong connection to these places they call home, which in many ways are not so dissimilar from other towns in America, and which are now threatened with partial or complete relocation or destruction within a matter of years—or, in some cases, months.” 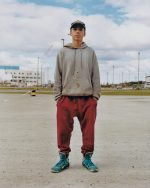 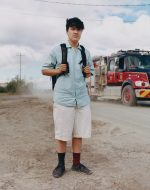 Left: Young man in parking lot, Bethel. The permafrost under the town of Bethel is deteriorating much more quickly than in most places in Alaska, causing many of the buildings and roads above to warp and collapse.

Right: Young man on the side of the road, Bethel.

We must act. Sustainability pioneer Donella Meadows once said, “There is too much bad news to justify complacency. There is too much good news to justify despair.” The good news is that we can move toward a future where every living thing has the water it needs to survive and thrive. We can grow more food with less water using smart irrigation systems. We can wash our clothes and clean our dishes with efficient appliances. We can adapt our diets and consumer choices to reduce our water and carbon footprints. We can move away from reliance on dirty, climate-changing energy sources toward renewable, clean energy. We can take natural resources out of the realm of violence and conflict and move toward peace and cooperation. And we can participate in decisions about what kind of politicians and governments we want by speaking out, voting, and demonstrating. But the transition from our current unsustainable world to a sustainable future will require the participation of all of us, the development of new technologies and ways of thinking, and the overturning of old, outmoded, and dangerous ideas and practices. A sustainable future is possible. Let’s make it a reality.

Peter H. Gleick is a climate and water scientist, a MacArthur Fellow, and a perennial optimist.

Has the internet broken the marketplace of ideas? Rethinking free speech in the Digital Age